It’s Sunday! I enjoyed some coconut yogurt with blueberries, topped with homemade granola for breakfast. My sister Angela made me a bag of granola for Christmas and then I also scored my Mom’s bag because she left without hers!! Woot!! Travis and the dogs when for a little ride on the skiff while I took a shower. Soon we are headed to Cape Henry Lighthouse to take advantage of the beautiful 60+ degree December weather before it rains later today. Tonight will be a shows and movies lazy night and I can’t wait!

I was prompted by my sister Zandria to get on my blog and share a recipe that I made for Thanksgiving…and have made many times before. She asked me for the recipe (because it’s so awesome!) and made it for her husbands family for Christmas.

Sometimes I make this salad with golden beets, regular red beets or a mix of both. These beets can easily be found at Whole Foods any time of year. I wash and cook the beet greens too. They are awesome with a little red wine vinegar. I’ve also had candy cane beets and white beets from the farmers market but of course they are only available seasonally.  They are worth the time to make them ahead of time before serving so that they can have a chance to chill. 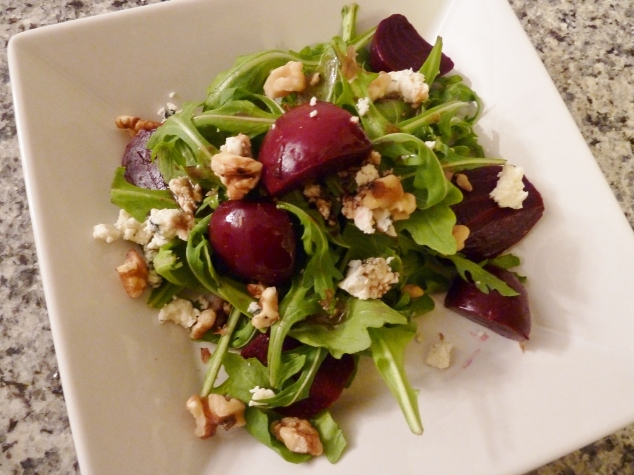 I shop at Whole Foods and their beets come 3-5 beets to a bundle (depending on size) and include the greens. First chop the beet stems off at the top of the beet, cut the long skinny end off of the root end (if any) and cut the beet in half or quarters depending on their size. No need to peel the beets. Put them in a pot and fill with water at least an inch over the beets (they cook for way longer than potatoes and you don’t want to water to evaporate before they are cooked…this has happened to me before!).
Test done-ness with a fork. When done drain into a colander and let cool for about 15 minutes. When they are cool enough to touch you can peel them by just pushing the skins off with your fingers. Then I put them in a container to cool completely in the fridge because I think they taste better cold. They can be made the day before.
to assemble Salad:
In a large salad bowl add baby arugula, beets, chopped walnuts and either crumbled blue cheese or goat cheese. I have made my own dressing before (lemon or a balsamic vinaigrette) but on Thanksgiving I used Newman’s Own Oil and Vinegar dressing. Toss salad and serve! Serves 3-4 people.